Not to be confused with Command Upgrade cards.

Click "expand" to see a description of Command Cards. 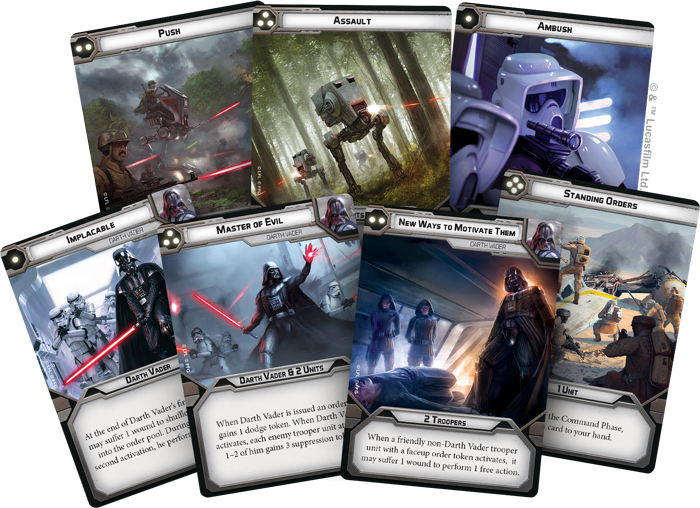 For standard play, every army is required to have 7 Command Cards, to be secretly chosen at the beginning of each of the game's 6 rounds. There are a variety of effects Command Cards can bring to each round, but their main function is to decide which player activates units first, and the specific order of select units each player will activate during the current round. While some Command Cards are neutral, others are restricted for use by specific Commander-Grade units in play. 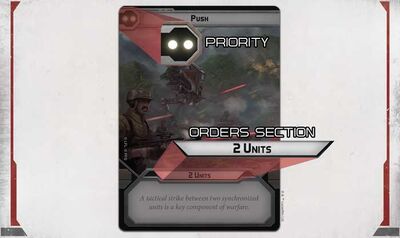 Each Command Card displays its Priority with between 0-4 pips in the top left of each card, with fewer pips representing higher Priority. If both players play a card with the same priority, the player with the round counter rolls a red defense die: on a block result, he is the first player for the round; otherwise, his opponent has priority for the round.

If a card has a character image and name in the top right, it is restricted only to used by armies that also contain the named character; if no such field exists on the card, it is neutral, and can be used by any army with no other requisite.

Neutral Command Card
Add a photo to this gallery

Under the card's art is the Orders Section, which shows what type and how many of each unit the card may activate. "Unit" refers to any miniature your army currently has in play. Some cards specify types of units that they activate- such as named characters, troopers, or both.

Every unit in your army will activate during every round of the game—but if you don’t issue orders to a unit, you can’t predict exactly when that unit may activate. All unactivated units' tokens go into a randomized pool, to be drawn from to decide the play order for the rest of the round.

The bottom section of each Command Card displays either flavor text, or a specific procedure or benefit for playing that card, which range from additional attacks, offering a boon for friendly units, or harm for enemy units.